Goldman Sachs and Morgan Stanley Survive! On The Back of Taxpayer Deposits?

Now let me state from the outset – I don’t claim to be a financial wizard, but I find it curious that in order for the last of our country’s investment banks to survive they must become – well – regular banks.

If somehow we haven’t gotten it thus far – AMERICA IS IN FINANCIAL CRISIS!  The scope of the crisis is truly unknown to the average citizen and while I am no doomsayer – it is not over. 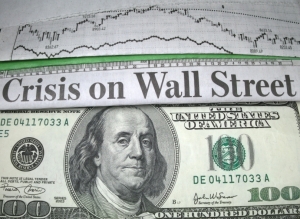 The borderline unethical financial practices of these institutions are the root cause of their demise.  When you loan money to people who can’t practically pay it back in the interest of profits – you are, in my opinion, acting without sound business ethics.  But here’s the deal – if it were you or I, we would be conviced of some fraud or conspiracy.  That would mean jail time.  But when your crime (yes I said crime) is so large that it shakes the foundation of our financial markets – you get bailed out and make no mistake the Fed’s action today (on a Sunday) is a bail out.

Think about it – over the course of the past three weeks our government in one form or another has spent up to nearly 1 TRILLION of our taxpayer dollars to shore up our financial institutions so that we would not experience another GREAT DEPRESSION.  Wise or not remains to be seen.  All I report on here are the facts.

Goldman Sachs and Morgan Stanley are the remaining two investment backs surviving.  Lehman Brothers filed for bankruptcy and will be sold to Barclays and Merrill Lynch was purchased by Bank of America.  Fascinating that little NCNB (former North Carolina National Bank) became Bank of America and now is the largest bank in the US with the Merrill acquisition.  Who said the South would not rise again.  But I digress.

According to a report by CNN:

The Fed announced that it had approved the request of the two investment banks. The change in status will allow them to create commercial banks that will be able to take deposits, bolstering the resources of both institutions.

It is clear that this change of status is designed to use “deposit” as a means of leverage giving them a stable source of funding.  The question is – who would want to deposit funds into either institution.

Answer:  In the surprise announcement late Sunday, the central bank said that to provide increase funding support to Goldman (GS, Fortune 500) and Morgan (MS, Fortune 500) during the transition period, they would be allowed to get short-term loans from the Federal Reserve Bank of New York against various types of collateral.

So let me get this straight in my mind – the federal reserve is going to make loans to both Goldman and Morgan giving them cash to offset their poor loan portfolio making them appear to be safe.  To me that is like paint a rotten fence with white paint and calling it new.  This is nothing more than a disguised bail out.

According to MSNBC: After the collapse of Bear Stearns and its forced sale to JP Morgan Chase last March, the Fed used powers it had been granted during the Great Depression to extend its emergency loans to investment banks as well as commercial banks. However, that extension was granted on a temporary basis.

But as commercial banks, Goldman Sachs and Morgan Stanley will have permanent access to emergency loans from the Fed, the same privilege that other commercial banks enjoy.

So here are some questions to ponder – and feel free to respond!

Question 1: Should the Fed have taken the actions to allow Goldman and Morgan to survive by allowing “normal” banking deposits?

Question 2: Do you feel that the actions by the “investment banks” have been ethical or unethical?  Why?

Question 3: With the massive actions taken over the course of the past three or so weeks, do you feel more or less confident in our nations economy?

As a business ethics speaker, I can say that there has never been a time in my lifetime that demands more thought, focus and ethical consideration of actions taken than now.  Business is good and business done with right ethical intention can grow and prosper.  But, as I say in practically every presentation I make – Every choice has a consequence.  Now we are reaping the consequences of choices made – not so long ago.

For all our sakes let’s hope that we can weather the economic storm ahead.

This entry was posted on Sunday, September 21st, 2008 at 9:48 pm and is filed under Business and Personal Ethics, Choices and Consequences, Financial Crisis, Government Bail Out. You can follow any responses to this entry through the RSS 2.0 feed. You can leave a response, or trackback from your own site.

2 Responses to Goldman Sachs and Morgan Stanley Survive! On The Back of Taxpayer Deposits?