$700 Billion for the banking bailout – $85 Billion for AIG (a private company) – these amounts are only a drop in the bucket of what it will truly cost before this financial fiasco is complete in the history books.  The sad thing is – in order to clean up the mess, the goverment will have to “borrow” money to correct – OVERBORROWING! 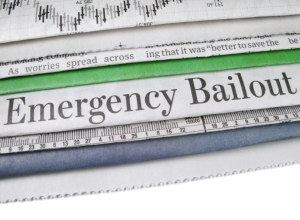 Now AIG says it needs more – almost $38 billion more!  Talking about missing a projection.  And the biggest question of all, where will it end?

Read the following according to CNN:

The New York Federal Reserve is lending up to $37.8 billion to American International Group to give the troubled insurer access to much-needed cash.

In exchange, AIG is giving the New York Fed investment-grade, fixed-income securities that it had previously lent out to other institutions for a fee. Those institutions are now returning these securities and want their money back.

The new program, announced Wednesday, is on top of the $85 billion the federal government agreed to lend to AIG last month to prevent the global company from collapsing. AIG said last Friday it had drawn down $61 billion.

To be sure none of us want to see a financial collaspe, but $38 billion on top of $85 billion – the question seems to be where will it end?  And what seems amazing is the magnitude of which the federal goverment is being the backbone of private “for profit” financial institutions.  Frankly put, if the issue were just you or I “Joe Citizen” and we were about to go under – we’d drown.  So why on the back of the taxpayers is the federal goverment backing institutions that have apparently thrown ethics to the wind when making financial desisions?

As a business ethics speaker, I am told daily that my phone should be ringing off the hook – “apparently Washington and Wall Street need your help.”  I can’t disagree with the sentiment, but they needed the help before they made poor business choices that have a clear unethical smell to them.

In a Forbes Article the following was stated:

AIG’s problems stemmed primarily from its insurance of mortgage-backed securities and other risky debt.

On Tuesday former top executives at AIG testified before the House Oversight Committee blaming everything but themselves for the company’s problems and subsequent bailout that cost taxpayers billions of dollars. (See “‘Wasn’t Us’ Former AIG Execs Say)

“Wasn’t us” my ass.  Sorry for the language, but if you’re an exec with a firm like AIG the buck stops with you.  Any person who runs a company has the power to make decisions that “should” be in the best interest of the shareholders.  With an equity decline of 95.4% – YES THAT IS 95.4% – who else to blame but the execs who set the course for the company.  Sure the market has changed, but it changed because “unethically” corporate executives have placed short term quarterly profits above common business sense.

My sense is – it will be a long cold financial winter that may practically last several seasons, if not years.  Your comments are always welcome!

This entry was posted on Wednesday, October 8th, 2008 at 11:17 pm and is filed under Banks, Business and Personal Ethics, Choices and Consequences, Financial Crisis, Government Bail Out. You can follow any responses to this entry through the RSS 2.0 feed. You can leave a response, or trackback from your own site.