Tough guy – Wesley Snipes – seems to be a bit “chicken” when it comes to his prison sentence.  In this case he’s not fighting in a movie, rather he’s fighting for his freedom in real life.

Now if you’re reading this, you probably already know the story…but the short version is – Wesley Snipes thought he was above 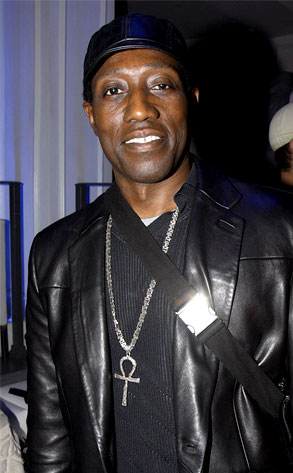 filing and paying his taxes.  Yea right!  A lot of people think that and they typically get what Wesley got…trouble with the IRS.  And, in Wesley’s case  – a prison sentence.  Three years to be exact for three misdemeanor counts of willful failure to file his income tax returns.  Now, Wesley did more than that, but when the results came back from the jury – that’s what he was convicted of.  Frankly, he’s lucky.

Now it seems that Snipes’ attorneys asked a federal appeals court to review an “unreasonable” three-year prison sentence for the film star, who was convicted a year ago on federal tax charges.  Attorneys for the star of the “Blade” trilogy and other films also argued the actor should have been granted a hearing to decide whether his trial should have been in New York instead of Florida.

Snipes was sentenced in April 2008 in what was considered a key victory for prosecutors who aggressively pursued the maximum penalty to deter others from trying to obstruct the IRS. They say he made at least $13.8 million for the years in question and owed $2.7 million in back taxes that he refused to pay.

The decision rests with the three-judge panel of the 11th U.S. Circuit Court of Appeals in Atlanta.

COMMENTS:  Now, I’ve stated before that Snipes will spend time in prison and I stand behind that belief.  Having been there (yes, time in federal prison for a tax crime – while today I speak to groups about choices and consequences) I know what Snipes is facing.  If I were he, I’d do the same thing, but all things being equal – he should just report and get it over with.

EVERY CHOICE HAS A CONSEQUENCE and soon Snipes will face the consequences of his actions and greed.  For those who say the tax system is unconstitutional and unfair and illegal…   Don’t waste you breath.  Failure to comply = prison.  Been there and done that.  Facts are – those folks who were in prison for tax crimes, become very compliant when they are free.  Some battles just aren’t worth fighting.

This entry was posted on Monday, January 11th, 2010 at 7:57 pm and is filed under IRS Tax Issues, legal, prison, wesley snipes. You can follow any responses to this entry through the RSS 2.0 feed. You can leave a response, or trackback from your own site.