Charles E. Phillips – What you do in the dark will be brought to the light – the billboard campaign outing…

As a kid I’ll never forget my mother buying an Elvis Presley gospel record with an upbeat song entitled “Run On.”  Elvis seemed to sing it so fast that I recall not being able to completely understand all the words.  But, one line I understood clearly went as follows, “As sure as God made the day and the night
What you do in the dark will be brought to the light.”

Now, I admit, I didn’t completely understand the implication of those words…not until my hidden activities came into the bright light of the media.  In my case, that fact that I was a liar and a thief was splashed all across the front pages of my hometown newspaper.  Were the headlines true?  Unfortunately yes!

Now it seems, according to a CNN report, another man named Charles – Charles E. Phillips – is finding out the implications of those words as his ex-mistress 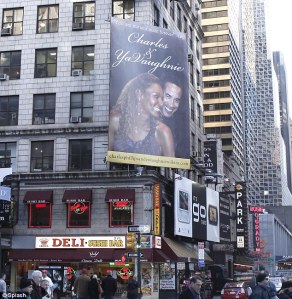 has elected to operate a “fatal attraction” splash of her own on billboards in major cities.  Charles was outed.  And, my heart goes out to him.

The CNN story reports in part (the whole story is here).

Phillips, 50, the co-president of Oracle Corp., admitted the affair with Wilkins, 42, in a statement released by his spokeswoman Friday.

Often talked of as a potential successor to Oracle founder and CEO Larry Ellison, Phillips is one of the software company’s most senior and highly paid excecutives. On top of an $800,000 salary for 2009, he took home stock options and other compensation valued by Oracle at more than $18 million.

“”I had an 8½-year serious relationship with YaVaughnie Wilkins,” the statement said. “My divorce proceedings began in 2008. The relationship with Ms. Wilkins has since ended and we both wish each other well.”

Phillips is reportedly still married to his wife, Karen, and the two have a son together.

It seems that Charles Phillips did indeed have an affair that apparently is ending his marriage – as divorce proceedings are in the works.  But, obviously, the former mistress wanted the last word by posting a series of giant billboards in New York, San Francisco and Atlanta.

New Yorkers passing through midtown Manhattan this week saw the smiling faces of “Charles and YaVaughnie” beaming down upon them from one of two billboards in the city with the caption reading, “You are my soulmate forever! – cep.”

SO WHAT’S THE POINT?

As a business ethics speaker, I often speak to executive groups in major corporations and since I share my journey from Tax Partner in a CPA firm to federal prisoner, I, more times than not, see participants cop an attitude that they would never do something that would bring such dramatic consequences to themselves.  I imagine that Phillips felt the same way.  In fact, I would suspect that he would have felt that his private life had no effect on his business and that the first time he would be featured on CNN is when he took over the leadership of Oracle.

Instead the actions of his, obviously upset and less than ethical ex-mistress, is a perfect example of choices and consequences.  In fact, the first words that I speak to a group are – EVERY CHOICE HAS A CONSEQUENCE.

Consequences come in a variety of forms and in ways that we often don’t expect.  Appointed last year to President Obama’s Economic Recovery Advisory Board, Phillips is finding himself dealing more than much needed economic recovery ideas.

Choices and consequences…sorry Mr. Phillips, but for those who read…this is just another example how ethical choices (or unethical as the case may be) has implications that are unavoidable.

This entry was posted on Saturday, January 23rd, 2010 at 5:02 pm and is filed under Barack Obama, business ethics, Choices and Consequences, ethics. You can follow any responses to this entry through the RSS 2.0 feed. You can leave a response, or trackback from your own site.

One Response to Charles E. Phillips – What you do in the dark will be brought to the light – the billboard campaign outing…