This is confusing! Kaleta barred by SEC from investment firms yet still connnected with BizRadio and Frishberg

I can’t quite get my hands around this whole mess, but something just doesn’t seem to connect.  I have found, based on experience, that when something doesn’t smell right…normally there’s a problem.  We might not be able to identify it at the outset, but all the pieces of the puzzle don’t completely connect

RELATED TO ALBERT FASE KALETA – The SEC issued the following:

In the Matter of Albert Fase Kaleta

On Feb. 2, 2010, The Commission issued an Order Instituting Administrative Proceedings Pursuant to Section 203(f) of the Investment Advisers Act of 1940, Making Findings and Imposing Remedial Sanctions (Order) against Albert Fase Kaleta. The Order finds that on Dec. 2, 2009, a final judgment was entered by consent against Kaleta, permanently enjoining him from future violations of Section 17(a) of the Securities Act of 1933, Section 10(b) of the Securities Exchange Act of 1934 and Rule 10b-5 thereunder, and Sections 206(1) and (2) of the Investment Advisers Act of 1940, in the civil action titled SEC v. Albert Kaleta, et al., Civil Action Number 4:09-cv-03674, in the United States District Court for the Southern District of Texas. The Order further finds that the Commission’s complaint in the federal court case alleged that, in connection with the sale of promissory notes made by KCM, Kaleta falsely stated to investors that the note proceeds would be used to make short-term loans to small businesses; that KCM would only lend to creditworthy individuals or entities whose models Kaleta had fully researched and understood; that Kaleta would perform due diligence to ensure that borrowers had the ability to repay their loans; that KCM would charge 12-14% annual interest on the loans, and would profit from the spread between that amount and the 10% promised investors. Instead, Kaleta misused and misappropriated investor funds. Kaleta paid himself, his family members, and his affiliated companies which were not creditworthy.

Based on the above, the Order bars Kaleta from association with any investment adviser. Kaleta consented to the issuance of the Order without admitting or denying any of the findings in the Order, except as to the entry of the injunction, which he admitted. (Rel. IA-2983; File No. 3-13773)

MAYBE I’M MISSING SOMETHING…but the last part of this order states that Kaleta is barred from association with any investment adviser…  O.K., so if I’m wrong, I stand to be corrected, but Daniel Frishberg is an investment adviser – isn’t he?  Regardless, the SEC stated the following on November 13, 2009:

Now one would assume that if the SEC bars Kaleta from association with any investment adviser, and that BizRadio and Daniel Frishberg Financial Services, Inc. were sued for equitable relief, that Kaleta and Frisberg should have become disassociated with each other.  After all, the SEC linked Kaleta’s “investments” to BizRadio and Frishberg.

But…then there’s the Memo that states with some joy that BizRadio is now being heard on 1180 AM a more powerful station… see below: 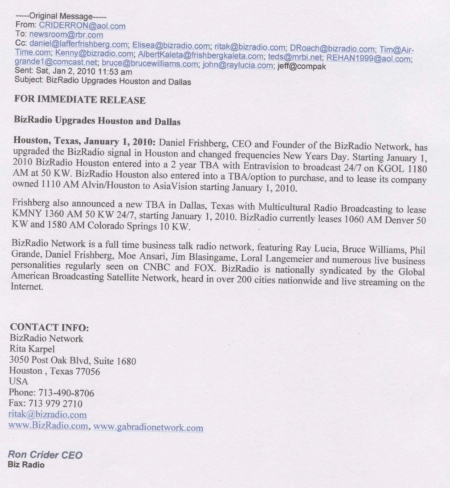 Now, there’s nothing wrong with moving stations, especially if the signal is better and reach more effective.  But how did they get the contract with 1180 AM?  Seems that Kaleta signed the check for the initial agreement (or so I’ve been told) which is on the BizRadio check.  See below:

But how can that be…?  Daniel Frishberg is the CEO of BizRadio.  BizRadio and Daniel Frishberg Financial Services, Inc. were parties to the SEC Albert Kaleta mess and sued for purposes of equitable relief and yet…ALBERT KALETA signed a BizRadio check for the January payment for BizRadio to be on 1180 AM…?

Oh, and then Entravision exercised their option to kick BizRadio off the air for failing to provide a payment of $150,000 which left BizRadio high and dry.  It was then, and appears to be only then, that Daniel Frishberg disengaged from an agreement with Rehan Siddiqi for his lease of 1110 AM for which Siddiqi had paid BizRadio – Frishberg, et al… $180,000.  While I can’t state this as fact, it appears that Siddiqi (who used to work with Frishberg at BizRadio) is out his funds…and as I stated at the beginning…something just doesn’t smell right.

SO HERE’S THE QUESTION…

If the SEC bars Kaleta from association with any investment advisor and Frishberg’s BizRadio was sued by the SEC for equitable relief, then why would Kaleta be signing a BizRadio check for an agreement that seems to have gone south – in a big way?

Did Kaleta sign the check show above or is he claiming it a forgery?

Why did BizRadio seemingly gladly switch to 1180 AM in January 2010 without any issue on Frishberg’s part that he was being taken advantage of?

And, when BizRadio was kicked off 1180 AM for failure to meet the financial terms, was that the event that caused Frishberg to cut bait and leave Siddiqi high and dry – having lost some $180,000?

CAN SOMEONE PLEASE PROVIDE SOME ANSWERS?  COMMENTS ARE WELCOME…

This entry was posted on Tuesday, February 9th, 2010 at 4:02 pm and is filed under BizRadio, business ethics, Financial Fraud, Scams, SEC. You can follow any responses to this entry through the RSS 2.0 feed. You can leave a response, or trackback from your own site.

One Response to This is confusing! Kaleta barred by SEC from investment firms yet still connnected with BizRadio and Frishberg