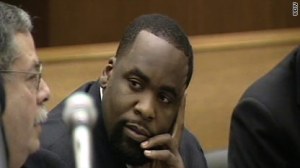 Back in 2008 I wrote a series of reports on the actions of Kwame Kilpatrick – former mayor of Detroit.  At the time, it seemed clear to all concerned that Kilpatrick was in serious trouble for his actions while Mayor.  For background information – just in case you are unaware – read the following entries:

Looks like Mr. Kilpatrick’s worst nightmare has come true.  PRISON!  Yep…you got it.  Found guilty in April of violating his probation by failing to report assets that could be used to pay restitution, Kilpatrick was sentenced by Wayne County, Michigan, Judge David Groner to a minimum of 5 years in prison.  Kilpatrick must serve a minimum of a year and a half, minus 120 days credit for time served.

Kilpatrick plead guilty back in September 2008 to two felony counts of obstruction of justice stemming from his efforts to cover up an extramarital affair. He also plead no contest to charges of assaulting a police officer attempting to serve a subpoena on a Kilpatrick friend in that case.  He was ordered to pay $1 million in restitution as part of his original plea deal.

Not long after I left this bustling community – Southlake, TX – Kilpatrick was reported to have relocated there.  For those who are unfamiliar Southlake is a very upscale community that, well lets put it this way, requires reasonable income to survive.  So a fair question is – how could Kilpatrick afford Southlake and effectively pay $1 million in restitution?

According to a CNN report:

“Let’s get the money if we can. If I put him in jail, it’s your tax dollars, Wayne County, and if he’s in jail, the county doesn’t get that money.”

Kilpatrick still needs to pay $860,000 in restitution as a condition of parole.

Soon after Tuesday’s ruling, Kilpatrick’s employer fired him from his six-figure sales job in the Dallas-Fort Worth area.

Kilpatrick must serve a minimum of a year and a half, minus 120 days credit for time served.  Guess during that time Kilpatrick will have reflection time to discover how and when he will begin the massive job of meeting his parole terms.

Every choice has a consequence and it seems that Kilpatrick is – again – getting a taste of consequences more clearly so that perhaps he’ll make more empowering choices moving forward.

This entry was posted on Wednesday, May 26th, 2010 at 3:58 pm and is filed under ethics, prison. You can follow any responses to this entry through the RSS 2.0 feed. You can leave a response, or trackback from your own site.