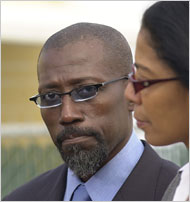 Every choice has a consequence and Wesley’s choices have landed him in prison.  Do I think the sentence is a bit harsh?  Yes.  But, Snipes did more – much more – than just fail to file returns.  Rather, Snipes elected through his choices to challenge the federal tax system.  HE LOST!

There is a message here.  Whether you believe in the system or not, if you challenge the system and don’t play by the rules – YOU WILL GO TO PRISON.  I know…I was there partially for a tax crime.

For more background on this story see these entries:

Candidly it would have been a miracle for the courts to have come back with any other verdict.  A recent story on CNN is quoted as saying:

Federal prosecutors said Snipes for nearly a decade escaped paying more than $15 million in income tax returns by sending money to overseas accounts, though they acknowledged in court that the amount was in dispute.

Before the sentencing in 2008, the actor asked the court to show mercy and offered three checks totaling $5 million as a gesture of good will.

Federal prosecutors diverted the checks to the U.S. Treasury, which accepted the payment — but it wasn’t enough.

“It’s essentially a down payment, but a fraction of what he owes,” Assistant U.S. Attorney Scotland Morris said at the time.

Snipes, now that the appeals courts has ruled, will be given a report date and location.  Likely, he will be sentenced to a minimum security prison and will soon find out that – even at a minimum security place – prison is still prison.  For those who call it “Club Fed” I would challenge you to try it.  Frankly, it sucks.

Snipes will be a celebrity behind prison walls, but soon will be treated like anyone else.  He is, after all, an actor.  His “tough guy” image is just an image and he will quickly learn that there are others who would easily take advantage of him.  Best advice…stay to himself and learn humility.

When location and time in announced…it will be reported.  Meanwhile, YOUR COMMENTS ARE WELCOME.

This entry was posted on Saturday, July 17th, 2010 at 12:16 pm and is filed under Choices and Consequences, IRS Tax Issues, prison, Tax Fraud, wesley snipes. You can follow any responses to this entry through the RSS 2.0 feed. You can leave a response, or trackback from your own site.