The BizRadio Saga – Albert Kaleta, Daniel Frisberg and David Wallace…this is the stuff bad movies are made of…

Is it that the ego is too big for the right thing to be done or it is that this is just a bad movie – only no one is shooting film?  The longer this saga continues the more I’m sensing that

there is “tarnish on the microphone” – Mr. Frishberg.

Albert Kaleta and Daniel Frishberg are (well “were” in the case of Kaleta) investment advisors, both having investor funds that were apparently under their direction.  Kaleta was the subject of an SEC suit in which Kaleta surrendered (I suppose you’d call it that) his license (in other words he is not supposed to be active in investing funds for others) and agreed not to involve himself with any other investment advisor(s).

The Order bars Kaleta from association with any investment adviser. Kaleta consented to the issuance of the Order without admitting or denying any of the findings in the Order, except as to the entry of the injunction, which he admitted.

So far so good…  Now it seems that Frishberg got to keep his investment license and, therefore, the ability to continue his investment activities (for which I’m told he’s pretty good at).  However, he and BizRadio were sued by the SEC.

Now…a new party to me enters the picture.  Apparently, David Wallace, former mayor of Sugarland, Texas and his investment partner Mr. Bajjali have been active in several successful real estate investment funds.  David Wallace is the Chief Executive Officer and Secretary of General Partner and Chairman of the Investment Committee for Wallace Bajjali Development Partners.  Also, David wrote the book –  “One Nation Under Blog.”  Wallace has an impressive track record.

However, my sources tell me that in one of their last investments (primarily real estate), Wallace placed a portion of the private investment with BizRadio (you know where the microphone is tarnishing these days).  Without verification, I am told that the Wallace Bajjali investment in BizRadio was some $5 million.  I am further told that Albert Kaleta was instrumental in bringing private investors to the table for the Wallace Bajjali investment offering.  In fact, I am told that the subscription agreement that some (I don’t know how many) of the investors signed were signed in Albert Kaleta’s office.

There must be some truth that Wallace Bajjali invested funds with BizRadio otherwise why would they have a UCC Filing with a lien on the company?  See below: 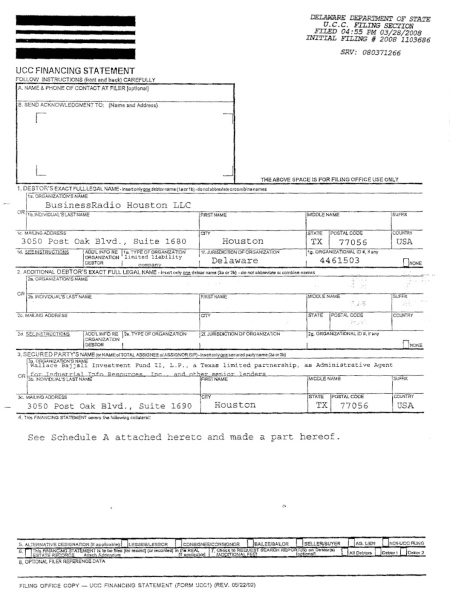 NOW IS THAT A PROBLEM? In an of itself – NO.  Albert Kaleta was reported to be a great investment closer.  Reportedly, Wallace would put the deal together (in many cases public-private partnerships) and Kaleta (with his extensive investor network) would bring investors to the table.  Seemed to work for all concerned…till the SEC got involved.

SO HERE ARE SOME QUESTIONS:

I suspect that David Wallace is wondering what the hell happened?  Likely, knowing the astute businessman he is, David is figuring out how to protect his investors from what appears to be the Daniel Frishberg ego implosion.  The remaining question is…when will reason and sense prevail?  Perhaps, if logical action is taken quickly, the microphone can be repolished and everyone go back to doing what they do best.

LET’S HOPE FOR INVESTORS SAKE…Frishberg doesn’t take everyone down with BizRadio.